10 Facts About Samoyed Dogs You Should Know - Factboyz.com 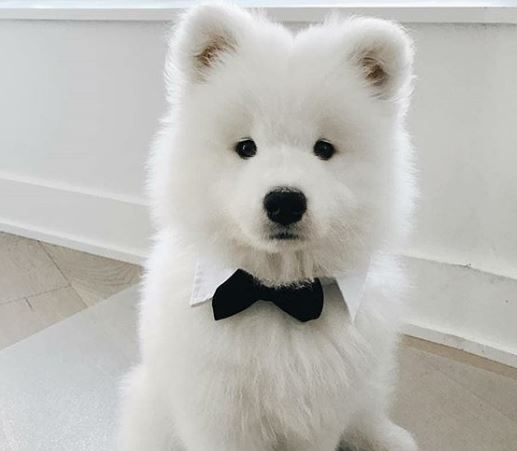 The Samoyed dogs are beautiful, graceful, fluffy and highly intelligent dogs. Though it might come as a surprise to many, the samoyed breed is one of the oldest dog breeds in the world. “Sammis” as they are also called, are very full of energy, strength and are resistant to cold. Samoyeds are also known to be great family dogs as they have a knack for dignity, smartness and loyalty.

Amongst these facts are many other facts and Factboyz.com brings to you 10 facts about the Samoyed dogs you should know;

1. Samoyeds Are One of the Oldest Dog Breeds

As we mentioned earlier, Samoyeds are one of the oldest dog breeds ever revealed to man. They originated from the reindeer-herding people of Siberia where they generally served various purposes. Initially, it wasn’t much of a surprise to see Samoyeds with a variety of various colours, but its no more the case today as they come in majorly the white colour which is now predominant in most parts of the world. Samoyeds came to England in the late 1800s, and they came sometimes as gifts from the czar of Russia. Queen Alexandra of Denmark is known to have loved them, particularly endeared to them. They were introduced in the U.S in 1906.

2. Samoyeds Are Prefer Cold To Heat

Samoyeds are sensitive to heat, and hence prefer cooler temperatures to hot ones. They might not be ideal to breed in climates such as the tropical africa; this is due to their conspicuously thick, luxurious fur. Samoyeds prefer cooler temperatures thanks to it’s scandinavian heritage. Hence, the Samoyed is a blends naturally in cold climates where they love to play and joke around in the snow. Sammi owners are advised not to let their Sammis overexert herself play sessions especially in a warm climate. It is necessary to also keep them inside an air conditioned space anytime the temperature is high.

ALSO READ
See Exactly What Will Happen In The Next Second!

The Samoyed can be referred to as a spitz breed, which means they’re part of a group of dogs known to be closely related to wolves. They have alike features which include their fox-like faces and curly tails.

According to MentalFloss In 2011, scientists discovered a 33,000-year-old fossil of a dog. The fossil—named the ‘Altai dog’ after the mountain range it was discovered on—is from a dog/wolf hybrid that seems to have been more dog than wolf. After conducting detailed DNA testing, the researchers found that the modern breed most closely related to this ancient hybrid is the Samoyed. Really old!

Unlike some other dog breeds, Samoyeds are without any smell whatsoever. In other words, you may not need to bathe Sammis as much as you should to other breeds of dogs; though brushing it’s soft fur is necessary.to keep them looking well groomed.

The Samoyed coat is not beautiful and classy by accident; owners of these dogs must be very disciplined about brushing them and keeping them groomed. This brushing should be done frequently to prevent tangling. Samoyeds are known to shed a lot of hair all over the place during shedding season and maintenance can be a very difficult, hard job. Samoyed Owners are known to take their dogs to groomers who help groom their dogs well. Though costly, its worth the price.

5. Samoyeds Are Good For Children

Samoyeds are a good dog breed for children and its always associated to be a good family dog. Its accommodating, natural and friendly demeanour has made it to be a favourite for children. The Sammis love for children is demonstrated by how it interacts with them especially at play. However, caution must be seriously taken to prevent the small children from being unintentionally knocked over by the Dogs. Close supervision is advised when kids play with Samoyeds. Samoyeds can comfortably relate with other dog breeds especially if they were raised together from a young age.

ALSO READ
This is Exactly What Happens When You Die

Samoyed is still naturally hunters and no matter how friendly it is
with humans it is still pre-conditioned to chase the prey, it is likely to chase after small animals that may intrude in its space all trying to protect his safety. Initially in Siberia, Samoyeds were used to hunt down reindeer and haul sledges for the
Siberian people. Samoyeds hunting instincts are so strong they cannot resist chasing rabbits or squirrels; hence they cannot be trusted off leash.

Samoyeds are always super active because they are working dogs. They do not joke with adequate space required to run around, romp and play. To enjoy Samoyeds, pet owners should endeavour to keep him active at all times and did we forget to mention that they are not fans of owners who just sit around without engaging in a form of “dogsport” They enjoy walks games, hikes and canine sports.

The Samoyed is an adorable breed of dog to behold. The medium-sized dog has a height ranging from 19 to 23 1/2 inches and weight from 50 to 65 pounds (23 to 29 kilograms). They are squarely built, sturdy dogs, with a fluffy plumed tail curled over the back and draped to one side. They have a beautiful smile known as the “Sami smile”

The physical glory of the Samoyed breed is in their sparkling white coat.

9. They Can Be Destructive When Bored

When bored or aggravated, Samoyeds can become easily become destructive; ensuring it disorganises items round about him. the Samoyed is not a lone wolf dog; hence it enjoys close company of those it lives with. It hurts Samoyeds mentally and physically when left alone in a kennel.

The average lifespan of this beloved dog is 12-15 years!