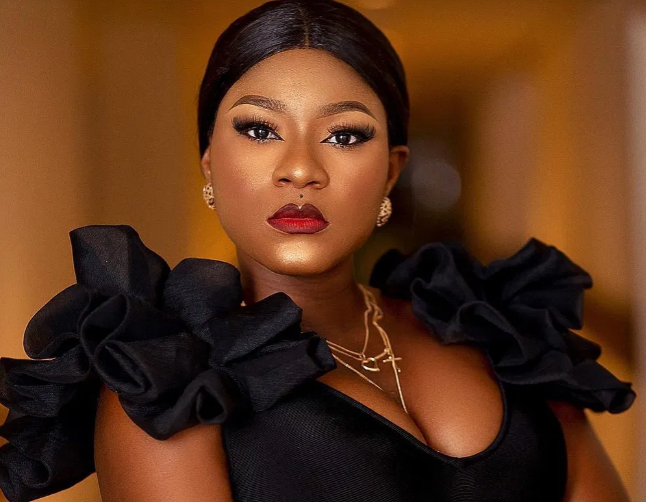 Destiny Etiko aka Dramadoll is a popular Nigerian actress who is popular for the role she plays in the Nigerian Nollywood sphere where she acts various roles as a professional actress. She is alsoquite popular because of the amount of fans she has in Nigeria, Africa and even in the European and American International scene.

In this Destiny Etiko Biography, we must highlight that Destiny Etiko did not start acting Nigerian movies as of recent, rather she has been in the movie industry for a long time dating to the early 2000s when she was still a child.

Destiny Etiko is also popular for the shape of her body which many lustful men find appealing and suitable often referring to her as a curvy actress. Destiny Etiko has starred in numerous Nollywood movies where she played diverse roles of which some include; househelp, wife, daughter to a King, Princess, poor village girl to mention a few. Destiny Etiko shuttles between Enugu, Anambra, Asaba and Lagos as these four states are her major bases where she spends time acting various Nollywood movies.

Destiny Etiko’s rise as a star actress can be referred to as a grass to grace story as she arose from her little background to become one of the most sought after actresses in the country. Destiny has starred in a number of movies such as Idemili, Shattered, Enuma, Saved by Love etc.

Destiny Etiko was born on 12th of August 1989 in Udi LGA of Enugu state to the family of John Anonde Etiko. Destiny Etiko is the second child her parents had out of 5 children. Destiny Etiko grew up in the city of Enugu and spent most of her childhood learning, passing through school and watching her mum who was also an actress perform. Destiny Etiko’s mother must have had the highest level of influence on young Destiny for her to choose the acting career as a lifelong profession later in life.

However, the difference her mother made on her life as an actress made Destiny Etiko to state in an interview that she does not want to repeat the mistake her mother made in the past where she had to abandon her acting and job as a professional actress to get married and raise children.

Destiny Etiko fulfilled that dream of hers by ensuring she hits stardom before getting married; unlike her mum who had to abandon her vision of continuing as an actress to get married and raise children.

It is on record that her father did not fully support her idea of becoming an actress, he later succumbed seeing the star she was becoming in the Nigerian Nollywood. He supported her till his sad passing away and death in 2020.

As we mentioned earlier, Destiny Etiko shuttles four major states; Enugu, Anambra, Delta and Lagos, but no state has endeared the heart of Destiny Etiko than Enugu, where she grew up. She is often spotted in Enugu countless number of times, driving around and getting one or two things from the local shopping gorcery stores littered all across Enugu. Sometimes, she is spotted in the popular Ofuobi African Center in Enugu where she goes to direct some movie she is producing, or feature in a movie.

Destiny Etiko has proven to be a humble personality as she can be approached by anyone. Sometimes, fans who spot her on the streets meet her and politely ask for selfies to which she gladfully obliges.

Destiny Etiko Biography cannot fail to mention that Destiny Etiko grew up in Enugu and had a good number of her years spent in Education, attending well known schools in Enugu.

She had her primary school at the Zik Avenue Primary school, Uwani Enugu – a notorious public school in the heart of the Enugu city.

Destiny Etiko also proceeded to attend the prestigious, reputable Queens Secondary School (all girls) in Enugu where she sat for and passed her West African Certificate Examinations. As a very determined student who wanted to excel at all cost, Destiny Etiko proceeded to study Theatre Art at the Nnamdi Azikiwe Univeristy in Awka, Anambra state where she also successfully graduated.

Destiny Etiko starred in various Nollywood movies but the one that she starred in that made her absolutely popular was the infamous movie titled Idemili.

Idemili movie is a 2013 movie, where Destiny Etiko was the star actress as she featured as a deadly snake goddess. That particular Idemili movie made Destiny Etiko become famous and soon enough her name became a household name as everyone wanted a glimpse of the star she had become. Idemili was directed by award winning producers and it went on to win diverse awards.

Destiny Etiko’s journey to become an actress like we mentioned earlier was a dream she nurtured when she was quite young. When she was already in secondary school, which in the real sense is a pretty much young age to register as an actress, she registered as an actress in Enugu where she had been for most of her life. In fact, Destiny Etiko registered with the Actors Guild of Nigeria – Enugu branch which was headquartered in National Museum Enugu.

Destiny Etiko’s talent in acting and movie production ahs endeared a lot of people to her including producers who have to pay millions to see her feature in their movies. She combines her acting with a character of Grace as to how she carries herself when acting. Destiny Etiko’s Nollywood acting style is very much original as she acts even far more professional, with acute realism than a good number of other actresses around.

Destiny Etiko has acted in various Nollywood movies which are of course, numerous to mention. She has also co-starred with a good number of top actors and actresses which include; Pete Edochie, Nkem Owoh, Tonto Dike, Ken Erics, John Okafor, Yul Edochie and a host of many others.

Destiny Etiko is worth over 50 million Naira and she has various sponsorship deals which she has signed in the past few months worth millions of Naira. Her 2 million follower Instagram account could also be a money muling machine she could have as she might be into affiliate marketing for brands in her Instagram page.

Destiny Etiko’s phone number can be obtained only on request via her email destinyetikoofficial@hotmail.com which she shared on her Facebook page. You can reach her in her social media handles below;

Destiny Etiko does not have a child yet.