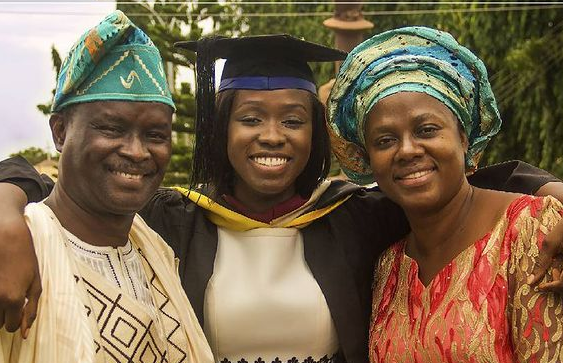 Darasimi Mike Bamiloye is the first daughter and third child of Evangelist Mike Bamiloye and Gloria Mike Bamiloye. She is a spoken word artist, dramatist, musician and producer. Darasimi has been fully involved with Mount Zion movies where she has acted various roles and in many capacities.

Darasimi Mike Bamiloye Date of birth is 14th May 1997

Darasimi Mike Bamiloye studied English at a Private University – Bowen University in Osun state where she studied English and obtained her Bachelor degree in that same course. She graduated from Bowen University in 2017. She went ahead to attend the National Youth Service Corps in Kebbi state where she was posted to. Kebbi state is a northern state at the North West part of the country. Her experience serving in Kebbi state was surreal and she used the opportunity to produce a movie there.

The title of the movie Darasimi produced while serving in Kebbi state is Land of Fury – the movie details the kidnapping and eventual rescue of secondary school girls who were kidnapped by militants but later rescued by a working of God. Her brother Damilola and Joshua Mike Bamiloye helped her produce this movie which went ahead to become a success. Her siblings flew all the way from Ibadan to Kebbi with equipment needed for the shooting of the movie.

Land of Fury is not the only movie Darasimi wrote; she is credited with writing the movie – Haunted which tells the story of a lady who was set to marry but was haunted by the shadows of her past as her former boyfriend wanted to come in and defile her while she was set to marry her fiancee.

Darasimi Mike Bamiloye is fully involved in the spoken word art and has used this unique gift of hers to minister to many. She has also featured in some of her brother’s music videos.

Darasimi Mike Bamiloye meeting her future husband Lawrence Oyor has its story starting in Kebbi state. Lawrence Oyor being a music minister himself, the combination made a lot of sense since the two of them were born-again Christians. But how did they meet?

According to Lawrence Oyor, after God ministered to him concerning Darasimi, he went ahead to pray and for one year he sought God in prayers concerning the matter. Lawrence said he didn’t want to think about it much and rather put his time serving God and trying to put his mind in other things. However, he began struggling with the decision day after day before he summoned the courage to speak to her.

He went ahead to travel all the way from Oyo state to Kebbi state to see Darasimi and though Darasimi was surprised at first, she sought the face of God and also got her confirmation.

Today, Lawrence Oyor and Darasimi Mike Bamiloye are fully into the Christian ministry. Lawrence Oyor has already established himself in the Christian sphere in Nigeria – with particular reference to ministering God’s word to the youths and in songs in form of deep spiritual songs known as chants.

See the video below,

how old is darasimi mike bamiloye? Darasimi Oyor is 24 years as t 2021.