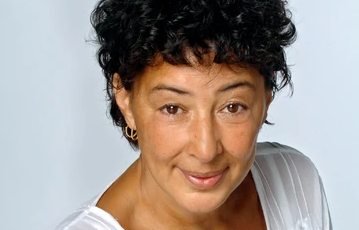 Heddy Lester Biography – Heddy Affolter (born June 18, 1950 in The Netherlands), better known by her stage name Heddy Lester, is a Dutch singer and actress best known for her participation in the Eurovision Song Contest in 1977 with the song “De mallemolen” (written by Wim Hogenkamp with music by her younger brother Frank Affolter), where she placed twelfth out of eighteen participants with 35 points.

Heddy Lester Career – She founded the duo April Shower with Gert Balke in 1969 after an abortive study at the Amsterdam Kleinkunstacademie, and they had a little hit with the English tune Railroad song in 1971. Ramses Shaffy, whom she met in her father’s restaurant in Amsterdam, with whom she performed on a regular basis during the 1970s.

Between 1979 and 1987, she collaborated on several projects with her brother Frank Affolter and lyricist Wim Hogenkamp.

Lester and her brother Frank were the first to get the Pall Mall Export Prize in 1979 for their debut solo program.

She has performed as a freelance actress in the theatre starting in 1987.

Mrs. Packard was Lester’s character in the animated film Atlantis: The Sunken City, which he voiced in 2001.

Toon Hermans and Gerard Walden, among others, sang alongside Heddy’s mother. In Camp Vught, she met her husband, Coen Affolter, who was Jewish. Coen Affolter opened the nightclub Iboyah in the late 1970s, when Heddy sang and Ramses discovered her.

Even tot hier was her return to television in 2020. In the film Greetings from Gerri, she also plays the mother of Gerri van Vlokhoven (Frank Lammers).