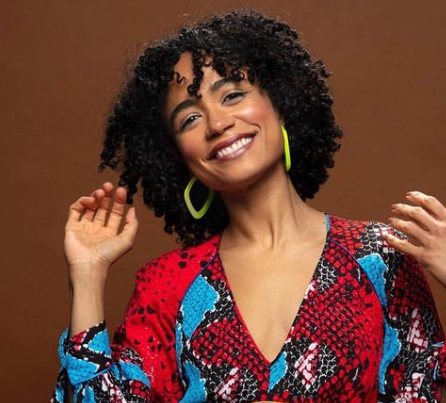 Lauren Ridloff is an American actress and teacher who has once held the position for Miss Deaf America. She has also starred in a number of movies which have also helped to put her in the limelight. Lauren Ridloff has been nominated for a Berkshire Theater Critic Award for Best Actress for her performance as Sarah Norman in the 2017 Berkshire Theater Group production of Tony Award-winning Children of a Lesser God.

She has also appeared in John Legend’s music video for “Love Me Now.” As mentioned earlier, Lauren Ridloff is the first Miss Deaf America of African-American and Mexican origin. She was cast in The Walking Dead series for its ninth season.

Lauren is expected to play a deaf superhero in the Marvel Cinematic Universe superhero film Eternals, scheduled to be released in 2021.

She is a Chicago native who now lives in Brooklyn.

Lauren Ridloff was born on April 6, 1978 in Chicago to a Mexican-American father and an African-American mother. Her parents believed their infant had a developmental delay, but at the age of two, they discovered Lauren was deaf.

However, her disability did not stop her from performing well in school. She started using her voice when she was 13 years old so that people would stop questioning her intellect based on her vocal intelligibility. She attended the Model Secondary School for the Deaf in Washington, D.C., before moving to the West Coast to attend California State University.

Hugo, her father, worked as a counselor at the University of Illinois at Chicago. Ridloff’s father was also a guitarist, and his mother was an artist. Ridloff grew up in the Hyde Park neighborhood of Chicago.

As mentioned earlier, she first attended the Model Secondary School for the Deaf in Washington, D.C., before moving to the West Coast to attend California State University.

Because of the National Center on Deafness, the institution had a sizable deaf and hard-of-hearing school community. She studied English with a focus on creative writing. She joined a local deaf performing group and began hip-hop dancing whilst in college.

She started working at the NCOD (National Center on Deafness) after graduating in May 2000, where she was interested in a campaign to enhance post-secondary school schooling for deaf and hard-of-hearing students.

She was the second consecutive CSUN graduate to win the title, and she was also the pageant’s first contestant of African-American or Mexican-American origin.
Since winning Miss Deaf America, she started a two-year career as a NAD spokeswoman, attending luncheons and graduation ceremonies.

Lauren Ridloff worked as a consultant on the 2017 film Wonderstruck before being cast in a minor role. She has starred in the lyric video for John Legend’s single “Love Me Now.”
Ridloff was employed to mentor him in American Sign Language when director Kenny Leon began making a revival of the 1980 play Children of a Lesser God.

Leon had cast Joshua Jackson in the male lead role but had not yet cast the female lead. Ridloff had been tutoring Leon for over a year at that point. He invited her to fill in at an early read-through, and based on her performance, he offered her the part.

Ridloff was a follower of the TV show The Walking Dead and auditioned for a role in the show. She was cast as Connie and began her appearance in the ninth season of the show, which premiered in October 2018. Ridloff was cast as Makkari in the 2021 Marvel superhero film Eternals in July 2019.

With the latter casting, she became the Marvel Cinematic Universe’s first deaf heroine. Ridloff took a leave of absence from The Walking Dead to film Eternals, missing six straight installments of the show’s tenth season.
Ridloff was named a 2020 Breakthrough Artist by the British Academy of Film and Television Arts, among 33 other talents in film, television, and sports, in 2020.

Lauren Ridloff will play a deaf superhero in the Marvel Cinematic Universe superhero film Eternals, scheduled to be released in November, 2021. Lauren Ridloff starred as Makkari in the Eternals movie.

Yes, Lauren Ridloff is deaf and was born deaf.

Lauren Ridloff is married to her husband, Douglas Ridloff. Douglas Ridloff is a successful entrepreneur and artistic artist. He is also an artist and multimedia storyteller, doing original compositions in Sign Language. He is also the owner of ASL SLAM and the executive director-host of the open mic show organized by his organization.

Lauren is worth more than $5 million