Lessons To Learn From Mike Bamiloye, As His Bio-Movie The Train Trends No.1 On YouTube - Factboyz.com 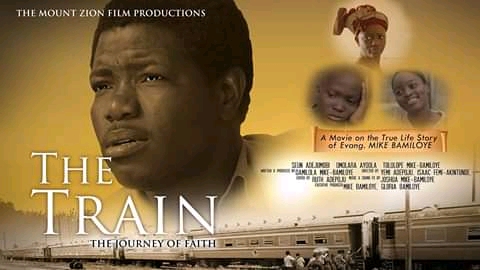 Mike Bamiloye’s biographical movie titled; THE TRAIN is making waves and impressing viewers worldwide as it hit the internet on May the 3rd; earning a comfortable number 1 spot on the Nigerian YouTube cyberspace.

The movie which details the true life story of popular Gospel Drama Evangelist Mike Bamiloye reveals the passion the younger Mike had for God hence taking a step of faith that changed his life forever.

Mike Bamiloye whose other name was revealed in the movie as “Abayomi”, started his life just like any other person would in Nigeria in the 1960s. The movie began on a rather solemn note showing how his mother passed away and the amount of pressure and grief it brought on the young “Abayomi” (Mike Bamiloye)

His childhood lifestyle portrayed in the movie, showed him gathering young children of his age, in a bid to make them act a short biblical movie “David and Goliath” He demonstrated his directing prowess by trying to direct the movie, but his effort failed miserably as no one wanted to act as Goliath! Lol

The movie continued as it showed Mike Bamiloye transform from a troublesome child to a well reserved and respected “bro” who took God and the work of God seriously.

The movies’ setting, casting and general character is highly impressive and generally good, too standard for a normal, everyday gospel movie. The movie started with a 1960s setting and environment which was hugely successful due to the blend of 1960s architecture, furniture arrangement, clothing and language.

Indeed, the movie is a classic for Christians who cherish Christian movies; even beyond the fact that the movie fared well, its godly essence and relevance will last for a long time in the Christian world which is in dire need of godliness and its propagation via movies.

The movie encourages total faith in God amidst the raging storms that might try to weaken or make one compromise.

Contents
1 1. Always Believe in God:
2 2. Never Give Up On A Child Whose Future Doesn’t Look Bright:
3 3. The Present Doesn’t Determine The Future:
4 4. What Irritates You Could Be An Assignment:
5 5. Your Marriage Partner Makes You or Mars You:
6 6. Virtuous Women Still Exist:
7 Related

Who doesn’t even know this one? That’s the first step for a successful roller-coaster ride in the Christian faith. Belief in God is beyond faith alone, it also involves taking a step of obedience and diligence in the study of the Bible.

2. Never Give Up On A Child Whose Future Doesn’t Look Bright:

From the movie, the young Mike seemed to have no clear direction in life, with his future looking incredibly bleak, yet he overcame all and was a surprise miracle to those who once mocked him.

3. The Present Doesn’t Determine The Future:

Your current situation now, doesn’t determine your future, it is not a stamp to your destiny tomorrow. Who thought a small, village boy would end up becoming a world renowned evangelist? No one! His marriage to Gloria Bamiloye also had an ugly look then, but look at them now! This is a great lesson!

4. What Irritates You Could Be An Assignment:

“Abayomi’ (Mike Bamiloye) was not happy with the apparent and obvious glorification of the devil via the television and it spurred him to action to cretae Christian content and movies that would rather glorify God. In his zeal for God, he set out on a journey of faith that God honored. His journey of faith is currently blessing thousands of people globally. As a Christian, there might be some evil, negative things that you may have noticed going on around you in your family, your place of work or even your church; it is time to speak up! That could be an opening door to your God-given ministry.

5. Your Marriage Partner Makes You or Mars You:

God helped Abayomi to pick someone who had the same passion with him; hence helping take him to greater heights. The lesson to be learnt here is enormous because when anyone chooses the wrong marriage partner, its resulting results becomes highly disastrous. However, the right spouse came because he trusted God and that spouse (Gloria) became a supportive pillar for his ministry.

Even amidst the chaos and confusion in that time, Abayomi was able to find a virtuous, godly lady to marry. Of course we cannot expect less because his trust was fully on God who he heavily relied on. It also teaches that it is worthy and honorable to wait on the lord in holiness and patience without being involved in immorality currently ravaging the lives of youths in our days.

The lessons are too numerous to mention but we have mentioned some which are worthy of note. Factboyz.com rates this movie high and it is recommendable for Christians struggling to answer the call of God upon their lives.

See Exactly What Will Happen In The Next Second!