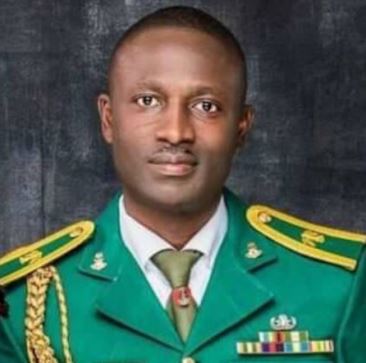 Major Stephen Datong was born 4 January, 1978. He is from Pankshin in Plateau state. He was sadly killed by bandits who invaded the Nigerian Defence Academy on August 2021. He was 43 years of age and practised Christianity.

His body was discovered on Tuesday evening, hours after he was kidnapped by bandits, according to sources.
The security breach at the Nigerian Defence Academy shocked the country, with many wondering if anyone is truly safe if bandits are allowed to operate freely inside an elite military school.
Major Bashir Muhd Jajira, the NDA’s Public Relations Officer, who first reported the attack, stated two troops were also slain.

A statement sent by Jajira said:

“The security architecture of the Nigerian Defence Academy was compromised early this morning by unknown gunmen who gained access into the residential area within the Academy in Afaka. During the unfortunate incident, we lost two personnel and one was abducted.

“The Academy in collaboration with the 1Division Nigerian Army and Air Training Command as well as other security agencies in Kaduna state has since commenced pursuit of the unknown gunmen within the general area with a view to tracking them and rescue the abducted personnel.

“The NDA community and Cadets are safe in the Academy. We assure the general public that these unknown gunmen would soon be apprehended and the abducted personnel rescued.”

Major Stephen Datong was pictured with his pregnant wife. They recently got married.

Charlie Watts Net worth, Cause of Death, Wife, Age