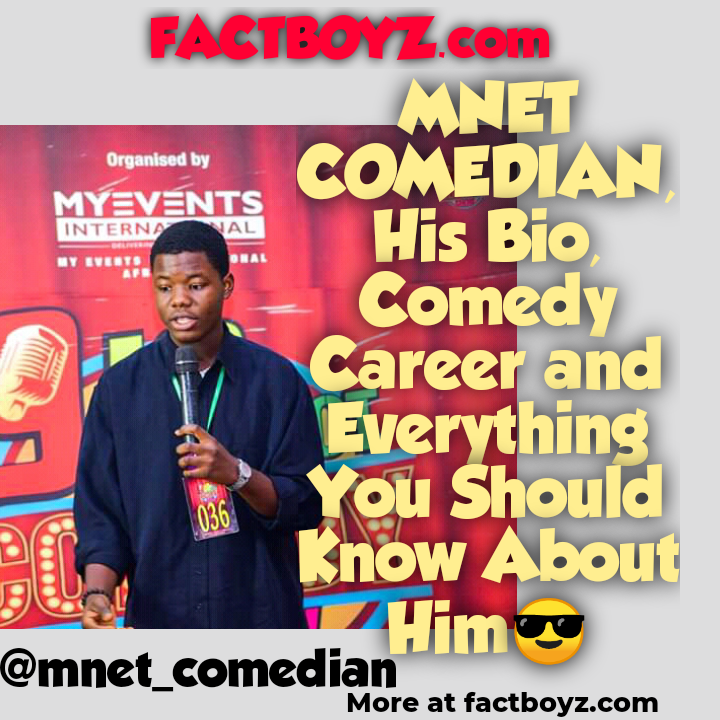 He comes from quite a large family with four other siblings totalling five. He is the last🤗

He began his career by performing on stage while he was in Junior Secondary 1(JSS1) in 2011. However, the professionalism in his career began in 2017.

ALSO READ  Top 10 Best States In Nigeria To Hustle In

Poised and determined to bring smiling faces to frowning faces; he has been moving up and conquering and he is not stopping any time soon!

MNET is young, creative, spontaneous and good. Due to his clever abilities, He has been able to meet and work with some top Nigerian comedians.

At the moment, he is working on two events which he is the host;

“Season of laughter with MNET COMEDIAN; which is a church concert; bringing relevant humour to youths and adults alike amidst spreading the gospel and

Unleash the Madness with MNET COMEDIAN; a comedy concert.

MNET COMEDIAN doubles as an events MC/host, comic actor, rapper and of course an entertainer. He is without doubt open for business.

One might ask, what does MNET mean?
” MNET ” means, he said it’s the short form of “MOSQUITO NET”

He also has other names such as ” Freestyle Craze Man” “Man on fire” Etc!

You can connect to him on social media platforms; REMEMBER HE DOESN’T DISAPPOINT😎

MNET COMEDIAN has performed at a lot of places which would be a sure pass that he’s good.

He is currently studying philosophy at the University of Nigeria Nsukka (UNN).

Vision 2020: The Colossus of a Monumental Failure