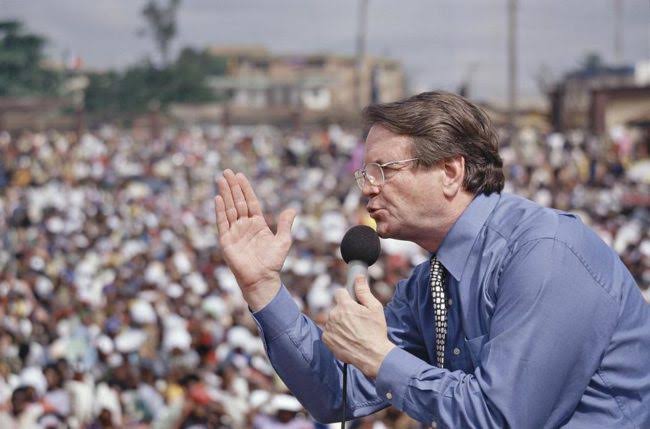 Bonnke in his lifetime preached to millions in Africa helping to evangelize the gospel in Africa. His 2000 crusade in Lagos drew a whooping total attendance of 6 million people.

Dear Brothers and Sisters in Christ, it is with sorrow that the Bonnke Family would like to announce the passing of our beloved husband, father, and grandfather, Evangelist Reinhard Bonnke,” Anni Bonnke said in a statement on Saturday afternoon.

“He passed away peacefully, surrounded by his family, on December 7, 2019. For the past 60 years he has preached the glorious Gospel of Jesus throughout the entire world.

“We want to thank you on behalf of him and our family, for your kind love and unwavering support, which enabled him to preach the matchless message of salvation to countless people.”

Reinhard Bonnke became born again at the young age of nine. This was reportedly after his mother called his attention to his sin. This led to him going for missionary work at the age of 10 in Africa, where he claims to have had an encounter with the Holy Spirit. This was just the beginning of his missionary work in Africa.

His ministry started formally after he attended Bible College in Wales and was ordained in Germany, where he pastored a church. He eventually left to start his missionary work in Africa in 1969.

There, he saw ‘the continent of Africa, being washed in the precious Blood of Jesus.’ This happened in Lesotho. This was the vision for his entire ministry, to reach people by spreading the Gospel.

With this vision, Evangelist Bonnke started open-air Gospel Campaigns, conducted city-wide meetings across the continent, and founded the international ministry of Christ for all Nations (CfaN), which has 75 million recorded decisions for Christ.

That encounter, led him to massive campaigns in evangelism; organising crusades and getting millions saved.

His 2017 final crusade in Lagos Passing The Torch had millions in attendance.