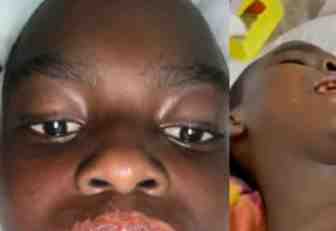 A video of Sylvester Oromoni fighting for his life in the hospital with scars in his mouth and broken bones after confessing that the bully students gave him something to drink and tormented him has revealed that the little kid was not killed by a football accident, as the school’s principal claimed.

This video was given by Sylvester’s uncle, who described his feelings in a heartfelt way.

In his words, he said:

“This was the state of Sylvester junior before he died. He couldn’t raise a leg or an arm. Will a boy in this state lie about what happened to him???? Dowen college should tell us what happened to my cousin. He kept complaining about his throat and stomach. Said he was given something to drink. God help us.”

This is the link to the video, NOTE THAT TWITTER DOESN’T WORK IN NIGERIA AND YOU HAVE TO USE A VPN TO VIEW THE VIDEO pic.twitter.com/sXCWuBBSv5

This was the state of Sylvester junior before he died. He couldn’t raise a leg or an arm. pic.twitter.com/n1YDmEUYa7