Mike Bamiloye FINALLY Tells Tope Alabi What To Do

CAN Finally Mourns TB Joshua 3 Days After His Death 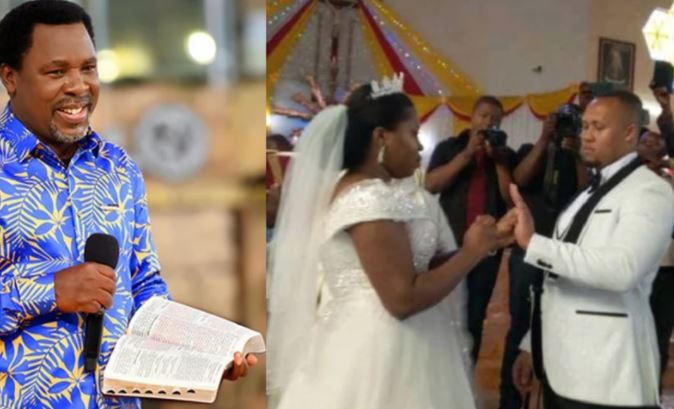 TB Joshua Daughter Wedding – TB Joshua, the daughter of a well-known Nigerian televangelist, has married her spouse for the third time.

The event took place in a Catholic Church in Unga Ltd, Arusha, on Saturday, May 8, 2021. The Arusha International Conference Center hosted a magnificent celebration to commemorate the occasion.

The pair married for the first time in Nigeria at a Pentecostal church, then in Dubai, United Arab Emirates, before returning to Arusha for the third time.

The marriage was blessed by Father Festus Mangwangi, who was quoted as adding that the union was not unusual.

It was a hybrid marriage, according to him, in which each spouse keeps his or her own religion after marriage, but the children join the Catholic Church.

Before the marriage was solemnized, the bride and groom signed a prenuptial agreement and later got the blessings of the Catholic Church, according to the man of God.

He went on to say that the bride’s past marriages were formalized in two different nations, a civil marriage and a formal Pentecostal Church marriage.

Because the groom, who is a devout Catholic, felt compelled to follow Catholic custom, he and his wife agreed to remarry.

Father Festus Mangwangi is quoted as saying, “The Catholic Church recognizes this marriage as a hybrid marriage where each person maintains their religion but the children will be Catholics.”

Hundreds of Arusha locals reportedly attended a lavish party at the AICC conference hall, according to reports.

TB Joshua’s wife and Nigerian relatives, as well as the groom’s family, attended the wedding.

Sara’s husband, Moshie, is a tourism businessman, while she works as a lawyer.