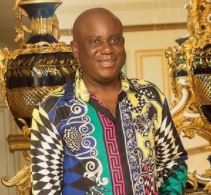 Terry Waya is a Nigerian billionaire who is from Benue state. He is also the father to former Big Brother Naija star Kiddwaya.

Terry is a well-known and well-respected London-based corporate tycoon and big-time businessman with a global reputation in the investing market. On the 3rd of May, the company tycoon was born in Benue State. He is now 60 years old. Former Nigerian governors Ibori and Alamieyeseigha were among the people Terry has worked with in the past. He is also mates with some of the country’s wealthiest billionaires. Governors and senators gathered in his residence to mark his birthday in 2021.

Terry Waya was born on the 3rd day of May 1961. He is from Benue state Nigeria. He is from the Tiv tribe of the state which is one of the major tribes in the state.

Before moving to Abuja, Waya attended Kaduna Polytechnic. In the early 1990s, he got his first break working as a consultant for the firm that developed the Transcorp Hilton.

From the mid-1990s to the early 2000s, he became a well-known fixer for top leaders, amassing a large sum of money in which he made investments in the United Kingdom and other European countries.

He started his business career in Kaduna State, despite being from Benue State. He spent a long time in Kaduna State with his family and son. He moved to Abuja with his family after spending several years in Kaduna, where his sons actively supported him in his company. Due to his social life and friendship with soldiers in Abuja, he began to experience exponential growth in his company.

He is a leading lobbyist with links to a slew of Nigerian elites, from politics to finance, and he has interests in real estate, energy, and hospitality.

Terry Waya is married to Eno Olafisoye (nee Udoh) and they have 2 children. Edo Udoh was the ex-wife of “Bisi Olafisoye,” a well-known businessman.

The Metropolitan Police raided him in his North London home in November 2005 on suspicion of money laundering.

Waya was accused of playing a key role in the bail scheme for fugitive Alamieyeseigha after a £500,000 deposit was made to secure bail for the ex-Bayelsa governor, who later fled to Nigeria.

Waya was arrested by the Economic and Financial Crimes Commission (EFCC) in Abuja in November 2008, after his ordeal in the United Kingdom. He was accused of impersonation and bribery.

Waya is a proud owner of various luxurious car brands but he doesn’t flaunt them often.

It is not yet clear if Terry Waya has a private jet; but he often flies in them.

He is from the Tiv tribe of Benue state