Top Ten Everyday Foods That Can Kill You (Photos) - Factboyz.com 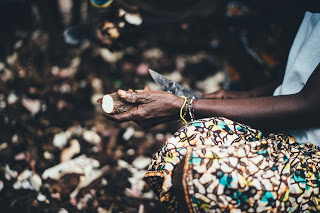 It is exciting when we eat our favourite foods. We eat to stay healthy, strong, and alert. However, some everyday foods we eat can become nightmares for us. Factboyz has prepared such food list. Endeavour to hit the share if you are shocked to see your favourites on our list. please hit the share button!

Below are Top 10 foods that can actually kill you!

Also called ‘akpu’ in Igbo, ‘Agingira/gangigara’ in Hausa and ‘Ege’ in Yoruba. Cassava is a food staple all over the world; widely used in the preparation of bread, soups, stews. etc The nightmare in cassava lies on the fact that if not prepared well before consumption or when it’s eaten raw; it can kill. This is due to the presence of hydrogen cyanide which is poisonous. If the cassava is treated/processed insufficiently, then it can lead to what’s known as konzo, a debilitating paralytic disease. A safe method of preparation is to mix any cassava flour (for the roots, cooking is generally all that’s needed) with water, make a paste and spread it over a basket, then let said paste stand for five hours. The cyanide produced by the cassava is broken down and released into the atmosphere, making it safe for human consumption. please hit the share button!

Potatoes are a surprise visit to this list but they can be dangerous. You may have heard that potatoes, if not consumed at the right time, can be dangerous. You heard correctly. The leaves, stem, and sprouts of a potato contain Glycoalkaloids, which are also found in nightshade. If you leave a potato in bad conditions (as in too moist or bright, or you just let them sit out for too long) they will begin to sprout. It’s suggested to throw these potatoes away, even if you do cut off the sprouts, as the poison may be in the potato if too much time has passed. The compounds that kill are known as glycoalkaloids. Consuming glycoalkaloids can lead to diarrhea, cramps, general confusion, headaches and even a coma or death. please hit the share button!

Another surprising appearance here on our list here on factboyz.com is water. Water Intoxication also known as water poisoning or hyper-hydration, is essentially death by drinking too much water. A couple of years ago a woman famously died during a competition to win a Wii console in which she was required to “Hold [her] Wee For A Wii” by drinking a whole load of water and then not use the bathroom for as long as possible. Which then killed her.
The over-consumption of water causes an imbalance in electrolytes in the brain, causing either hypernatremia or hyponatremia, potentially lethal electrolyte imbalances. please hit the share button!

Raw cashew nuts contain urushiol, a chemical also found in poison ivy. This chemical can cause the same effect as poison ivy, or poison oak. High levels of urushiol can prove fatal. People who are allergic to poison ivy are likely to have a fatal allergic reaction to eating actual raw cashews. please hit the share button!

When honey doesn’t go through the pasteurization process in which harmful toxins are killed, unpasteurized honey often contains grayanotoxin. That can lead to dizziness, weakness, excessive sweating, nausea, and vomiting that last for 24 hours. Typically just one tablespoon of concentrated grayanotoxin can cause the symptoms above. It would be a bad idea to consume multiple tablespoons. please hit the share button!

Tomato stems and leaves contain alkali poisons that can cause stomach agitation. Unripe green tomatoes have been said to have the same effect. Consuming large quantities of it is definitely fatal. Though exactly high-risk, but you might avoid eating tomato leaves. please hit the share button!

That moment when we think of it as a spice, not knowing its actually a hallucinogen at vast quantities. Nutmeg can cause dizziness, vomiting, nausea, central nervous system excitation, and even death. It takes about two tablespoons before someone starts feeling the painful and powerful effects of nutmeg. Indeed this has landed hundreds of people to the hospital.

The poison in apples lies in the seeds, but most people do not know about that. Cyanide toxicity takes place at 0.5 to 3.5 milligrams per kilogram of body weight, and apple seeds could do the job if you were to eat enough of them. The cyanide amygdalin is the culprit.
Each apple seed contains about 2 milligrams of amygdalin.That means you have to consume 140 apple seeds for it to actually kill you. please hit the share button!
9. Raw Meat and Uncooked Eggs:

Nigerians are great lovers of meat including red meat, poultry, and the unpopular seafood. However these and uncooked eggs contain salmonella bacteria, which can cause gastroenteritis in humans. Salmonella poisoning can also lead to serious complications, such as bacteremia (when salmonella enters the bloodstream), that are life-threatening to people with weaker immune systems. So light a flame under your meat to avoid any risks. Stay safe. please hit the share button!
10. Rice:

Rice contains trace amounts of arsenic, a poison used in the construction of lasers and the preservation of wood that’s somehow made its way into the food supply. Side effects of eating arsenic include diarrhea, vomiting, vomiting blood, blood in the urine, hair loss, stomach pain, convulsions, and (you guessed it) death. But you’d have to eat literally tons of rice before you consumed a lethal dose. Some sources say you’d need 7 million servings to kill. Thats a whole lot! please hit the share button!
Hope you enjoyed our list? Please do share and spread the News! Much Love from FACTBOYZ

Ten Amazing Facts About Nigeria That You Should Know