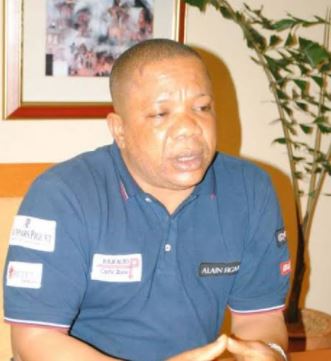 Ubanese Alphonsus Obi Igbeke Biography – Alphonsus Obi Igbeke aka Ubanese(born 1962) is a Nigerian senator who was sworn in as Senator for the Anambra North constituency of Anambra State, Nigeria on 25 May 2010. He was sworn in after the election of Joy Emordi of the People’s Democratic Party (PDP) had been annulled. He is a members of the All Nigeria Peoples Party (ANPP).

Igbeke, also known as Ubanese, was born in 1962 in Nsugbe, Anambra State, just north of Onitsha.

He earned a PhD in Engineering Sciences after studying in Nigeria and the United States. He returned to Nigeria and started a contracting firm, eventually becoming a wealthy businessman with homes in Onitsha and Lagos.

In the 2003 elections, Igbeke ran for a seat in the House of Representatives as a PDP candidate, but he was not nominated. He joined the Alliance for Democracy (AD) and campaigned for office on its platform, however he was defeated by the PDP candidate. Igbeke is accused of using his political contacts to get an election tribunal panel to accept that his name had been improperly deleted from the PDP primaries and that he had been proclaimed elected.

Igbeke campaigned on the ANPP ticket for the Senate seat of Anambra North in April 2007. Joy Emordi of the PDP was proclaimed the winner, a decision he challenged. [number four] Following a judgement by an Enugu appeal court declaring Igbeke the victor of the 2007 senatorial race, he was elected to the Senate. The Senate first refused to swear him in since an appeal was pending, but subsequently accepted the court’s judgment. The Senate leaders have been roundly chastised by the Conference of Nigerian Political Parties (CNPP) over the delay.

A BBC Investigative video accused the senator of masterminding kidnappings of children who disappeared in 2001 after throwing fireworks at the senator who arrested and haven’t released them till date.

Senator UBANESE ALPHONSUS OBI IGBEKE, in year 2001, arrested about 8 kids between the ages of (9-12) from Nsugbe town, in Anambra State, whom he accused of throwing firecracker (Banga) at him. He used his vigilante boys to torture them, & later accused them of shooting guns.

Their houses were searched, & nothing was found. But senator UBANESE insisted, took them back to his house for another rounds of torture. His aged mum begged him to release those kids, she called it (aluu) abomination, but he refused, & continued to torture those little kids.

It is now 20 years, when that incident happened. Those kids were not released to their parents, they haven’t been seen or heard from.
Senator UBANESE ALPHONSUS OBI IGBEKE, is walking a free man, why the parents of those kids, cry everyday of agony.
Some have died of thinking.

When confronted, Senator UBANESE ALPHONSUS OBI IGBEKE, said he handed over the kids to the
police, after they confessed to own guns.
But his elder brother, who is now (late) confided to the parents of those kids that, his younger brother, (UBANESE) used them for rituals.

The children are gone, their parents are poor, & all avenues they have seek, in getting justice, has been blocked by Senator UBANESE ALPHONSUS OBI IGBEKE.
He threatened that, he will deal decisively with them, if they accuse him again. That he is rich, and highly connected.