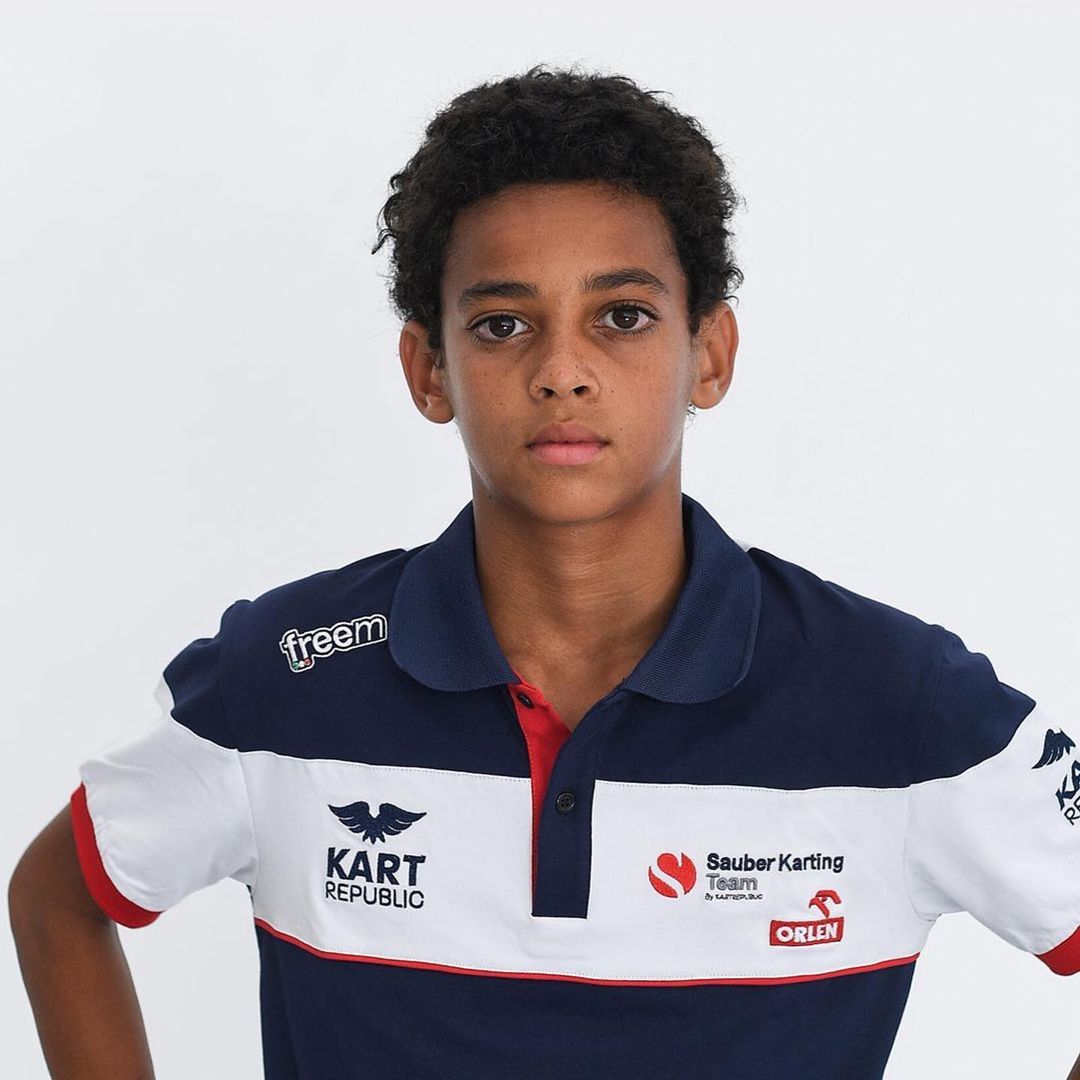 Ugo Ugochukwu made headlines all over the world after he was signed by a top racing car company McLaren. Prior to the long term agreement and signing with McLaren, Ugo Ugochukwu has proven that with time he could overtake the like so of Lewis Hamilton with regards to Car racing and sports.

Ugo Ugochukwu, though relatively young for his accomplishments is obviously on the radar of the racing car world as he is believed to rise high in the industry.

The British motor racing team McLaren Racing Limited, a B, recently signed Ugo Ugochukwu. The breaking of this news brought joy to most racing fans worldwide and mostly not surprisingly to Nigerians who celebrated the young chap whose model mum was born and raised in Nigeria before relocating to the United States.

Ugo Ugochuwku Orlandi was born on the 23rd of April 2007 to Nigerian and Italian parents Oluchi and Luca respectively. Ugo Ugochuwkwu’s mother moved to the United States from Nigeria to start a career in modelling. She had already begun the art of modelling back in Nigeria where she featured as the face of Africa (now called Nokia Face of Africa). She won the competition in it’s inaugural stage – setting a pace for an exciting and fulfilling career ahead of her.

Ugo Ugochukwu is the first son and child of his parents but also has a younger brother. Together, the two grew up in New York.

Ugo’s life as a young growing boy in New York city exposed him for the great future ahead of him; having somewhat celebrity parents, he grew up surrounded by the best the society could offer with great support from his parents who got married in 2006.

Luca Orlandi is the father of Kart racer Ugo Ugochukwu who became prominent following his announcement as the latest young signing to McLaren. Luca Orlandi is an Italian fashion designer who was born in Milan, Italy and moved to the United States.

Luca Orlandi started his career in his family’s textile company, which has been a pioneer in fine yarns, fabrics, textile machinery, and fibers for decades. After receiving his BA from Bocconi University in 1987, he relocated to New York to pursue his master’s degree at Columbia University School of Business. On Seventh Avenue, he began his apprenticeship with the Hero Group, a licensee manufacturing company that produced bridge lines for Oscar de la Renta, Bill Blass, and Oleg Cassini. Orlandi founded the LUCA LUCA company in 1991.

Oluchi Onweagba is the mother of Ugo Ugochukwu. Born in 1980 in Lagos, Nigeria; Oluchi Onweagba was raised in the suburbs of Lagos where she grew up with her two brother and sisters. Her father worked as a civil servant while her mother was a nurse in the same state.

Following a brief modelling career in Nigeria, Oluchi Onweagba relocated to New York City to follow her passion in the modelling industry where she thrived.

After relocating to New York City, Oluchi graced the covers of Surface, Pop, ELLE, i­D, Untold, and Italian Vogue, as well as Marie Claire, Allure, Nylon, and other national editions of Vogue around the world. She is the star of advertisements for Gianfranco Ferré, Gap, Express, Banana Republic, and Ann Taylor, as well as appearing in print for Victoria’s Secret and walking in the annual Victoria’s Secret Fashion Show for seven years in a row.

She starred in the Sports Illustrated swimsuit issue for four years and did runway shows for Tommy Hilfiger, Chanel, Gucci, Givenchy, Fendi, Christian Dior, Giorgio Armani, Nina Ricci, and ad campaigns for a variety of brands, including Victoria’s Secret.

She has also founded her own African model agency, O Model Africa, which is committed to supporting the next generation of African models. She is also the host and chief judge of Africa’s Next Top Model.

Oluchi’s passion for her motherland, Nigeria, has inspired her to promote development across the African continent while also creating opportunities for others to follow in her footsteps. Oluchi executive produced and anchored the hugely popular reality television show “Africa’s Next Top Model” in 2013. (ANTM).

ANTM gives African women the ability to fight for a chance to launch a career in the modeling industry. Oluchi is single-handedly elevating African modelling and fashion to new heights.

From a young age, Ugo Ugochukwu demonstrated a passion for racing karts and his career is acknowledged to have begun when he was just 6 years old in 2014.

His racing Karts began in New York city where he has also won various championships in his so far exciting Kart racing career. His success in winning the 2014 Micro Rok Championship, the 2017 International Open X30 Mini Championship, and the 2018 Challenge of the Americas Rok Junior Championship, led him to win the six-round 2020 FIA OKJ European Championship ahead of Britain’s Arvid Lindblad and Finland’s Tuukka Taponen, despite finishing only eighth in the one-off World Championship event.

In March 2021, McLaren annouced that they were signing the young, emerging star Ugo Ugochukwu in a move that greatly popularized the young chap. The announcement by McLaren was greeted with wide excitement from kart racing fans as well as Nigerians who celebrated him on social media as being a hope for the Nigerian young. The praise he got from the Nigerian media was greatly influenced by his mother who is also a Nigerian and his name “Ugo Ugochukwu which is obviously Nigerian of the Igbo tribe.

“We’ve been watching Ugo’s progress with interest, so when the opportunity to sign an agreement with him became available, we had no hesitation moving on it,” McLaren has had a history of signing future Formula One stars from a young age, with many of these stars such as Lewis Hamilton doing well in the future.

He is on Instagram and his username is ugougochukwu