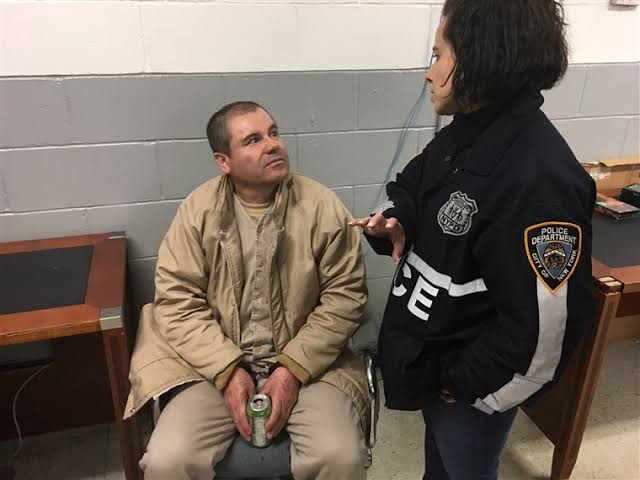 The notorious, deadly drug kingpin Joaquin El Chapo Guzman is someone the US government cannot allow to escape its prison.

This drug kingpin who began from very humble beginnings in Mexico as the son of a farmer in Sinaloa ended up being one of the richest and most wanted drug kingpin in history and enemy number 1 of the US with regards to its fight against drugs. He is currently locked up now but getting him was a hell of an effort as he has previously escaped from maximum prisons in the past twice! Hence, he he highly guarded possibly like no other prisoner on the planet.

He was arrested in the South American country of Guatemala; the charges against him included murder, kidnapping and drug trafficking. The authorities accused him of being part of a really huge trafficking operation in a massive tunnel that ran from Tijuana to San Diego where drugs were transported. He was immediately extradited to Mexico where he got 20 years in a max security prison. In this prison, it is said that he lived in luxury and comfort having the guards run errands for him even as he ran his operations from the prison. However, fearing extradition to the USA for drug crimes, he began to plan his escape.

In January 2001, he made the first escape with help from the prison even as he hid himself in a laundry basket while wheeled through a series of doors and eventually made it through the main entrance where a truck was waiting to take him to his hideout. It is alleged that this escape pulled a lot of people along the lines including the prison wardens and even the prison director who were all on his payroll.

ALSO READ  How To Scare Armed Robbers Away During This Lockdown [It Works!]

All these bribes summed up to almost 3 million dollars.

You might have thought he changed his name, repented and moved to an island somewhere to enjoy his wealth? Wrong! He kept on doing what he did and soon became the most wanted man in Mexico.

After an operation between Mexican and US authorities in 2014, he was captured again and you could be sure they swore he would never escape again. Wrong! This time, he was locked up in a very secured prison; his cell had no windows and he couldn’t even contact anyone. All he had was a bed, shelf, toilet bowl, a shower and a basin! That was all he could be given. The guards were not even allowed to communicate with him and he was allowed just one hour time outside his cell each day.

“Indeed There Was No Way Of Escape”

Well, on the 11th of July 2015, he doubled his accolades in escaping his highly secured cell when he spotted a blind spot in his cell where the camera doesn’t feature – the shower area. El Chapo’s men had been digging a tunnel prior to this escape that had the shower as its endpoint!

The tunnel construction began and in months it ferried the most wanted drug kingpin to safety as he escaped the law the second time. This freedom however didn’t last so long.

He was captured again at one of his hideouts and this time the Mexican authorities had no other choice but to hand him over to the US. El Chapo’s men tried all they could to stop his extradition to the US by even assassinating a federal judge, but that didn’t work. He was finally extradited on January 2017 to the United States to face the law.

ALSO READ  Lessons To Learn From Mike Bamiloye, As His Bio-Movie The Train Trends No.1 On YouTube

In his sentencing, he received life imprisonment plus 30 years. For sometime, no one knew exactly where he was; even his lawyers couldn’t point out the prison where he was being held but it was later revealed to the public to be The United States Penitentiary Administrative Maximum Facility in Florence; Colorado. In short ADX Florence.

This prison houses the worst of the worst criminals and it is a hell on earth on its own. In this prison, there are way more guards than its inmates.

Inmates are locked up 23 hours a day and even when they are allowed out from their cells, it may come at anytime of the day or night and no one can know exactly when an inmate is out; hence making an escape almost impossible. The 7 by 12 ft cell has a bed, a stool and a bed all made of hard concrete. The cells are sound proof so prisoners cant shout or even communicate which each other.

Another feature of this hell on earth prison is that the inmate never know exactly where they are at the prison and even when they exercise, (in a closed space) they cant see over the walls. Infact it takes 10 steps to walk from end to end!

The prison has motion detectors, cameras and thick steel doors that can only be opened with remote control. These cameras monitor everything and if a problem is sensed, the prison guards hit a panic button that locks down all the doors in the facility.

Even if a prisoner manages to escape the pressure pads, cameras and everything, a 12foot tall razor wire fence awaits them outside and this will me in he midst of heavily armed guards and towers surrounding the facility.

It is assumed that Guzman is locked in the most secure part of the prison known as Range 13.

A former warden described the prison as “life after death”, “its far much worse than death” others remarked the place as being dangerously quiet as no two inmates move at the same time.

Another said the facility was a clean version of hell.

Unlike his previous escape plot, Guzman cannot buy land around the prison because its in a secure and remote location. Guzman so far has been allowed visits from his lawyers and his two daughters. He cannot even touch anyone who visits him.

Guzman reportedly told his lawyers he couldn’t sleep well because the lights were turned on all the time! And he constantly throws up with bouts of headaches.

The prisoners can at least breath an air of relief as Televisions are around but they only display religious and educational shows.

But what are Guzman’s chances of escaping the “most secure prison on earth? Even if he bribed the guards, how would he get past the pressure pads, the CCTVs, the guards on the towers, the guards with dogs, the razor fence etc. And what if he hacked the system? How could he possibly pass the guards?

Prisoners have the rights to seek medical attention even though they are secured.

In conclusion, El Chapo can only escape if there’s probably a global apocalypse where all the prison’s systems and guards will be shut down or missing in action. Do you think so? Hit the comments!

Who is Odumeje? The Lion Himself

The Disappearing Nigerian Oil And Why You Should Be Worried