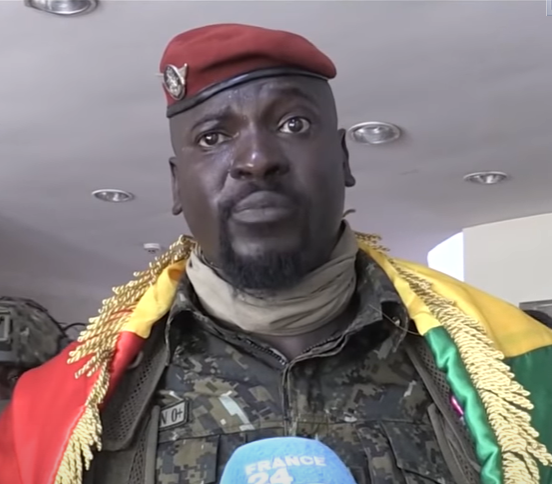 Mamady Doumbouya is a Guinean military coup commander who took power from the country’s 83-year-old president, Alpha Condé, on September 5, 2021.
Mamady Doumbouya is a colonel who orchestrated the coup d’état in Guinea in 2021. Doumbouya declared on state television on the day of the coup attempt that his faction had abolished the government and the constitution.
He is a former French legionnaire and member of the Special Forces Group.

Colonel Mamady Doumbouya was born in 1980 in the Kankan Region of Guinea. He is Mandika by tribe.

The Mandika are a West African ethnic group who live mostly in Mali, Guinea, and northern Ivory Coast.
They are the largest subgroup of the Mandé peoples and one of Africa’s largest ethnic-linguistic groups, with a population of around 11 million. They speak the Manding languages, which are part of the Mande language family and are widely spoken throughout West Africa. Mandinka Muslims account for over 99 percent of the population.

During his 15-year military career, he has served in missions in Afghanistan, Ivory Coast, Djibouti, Central African Republic, and Israel, Cyprus, the United Kingdom, and Guinea, as well as close protection.
He “brilliantly finished” operational protection expert training at the International Security Academy in Israel, as well as elite military training in Senegal, Gabon, and France, according to reports.

Before returning to Guinea to lead the Special Forces Group, an elite military outfit founded by Alpha Condé, Doumbouya was a French legionnaire with the rank of corporal.
His worldwide experience, including training he had undergone in a number of nations, was noted when he was promoted to the rank of battalion commander when he took office. In 2019, he was promoted to lieutenant colonel, and in 2020, to colonel.
He was rumored to be seeking increased authority for the Special Forces Group in 2021.

Doumbouya was the mastermind of the 5 September 2021 Guinean coup, which resulted in the detention of Guinea’s president, Alpha Condé.

On state television, Doumbouya said that his faction had dissolved the government and the constitution.

He also claimed that the “National Committee of Reconciliation and Development (CNRD) was forced to take responsibility” as a result of the “dangerous political situation in our country, the workings of the judiciary, the non-respect of democratic principles, the extreme politicization of public administration, as well as poverty and corruption.”

Col Doumbouya is one of 25 Guinean officials who the EU has threatened to sanction for alleged human rights violations committed under President Condé in recent years. Colonel Mamady Doumbouya Biography

Doumbouya is married and has three children.

Colonel Mamady Doumbouya has an estimated net worth of $10 million. The wealth of his country Guinea are firmly in his hands after seizing power for himself in 2021.

Sarah Harding Net worth, Husband and Cause of Death