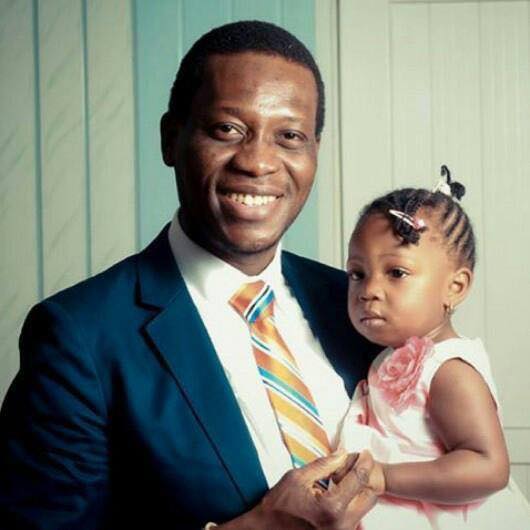 On June 9th, 1978, Oluwadamilare Temitayo Adeboye was born into the family of Pastor (then Dr.) Enoch Adeboye and Pastor (Mrs) Folu Adeboye as the fourth child. His arrival was a miracle since their previous children had all been delivered by caesarean section, and the doctors had urged the pair not to have any more children. The doctors recommended termination because they had expected that the mother and child would have to choose. However, their prediction was incorrect because, miraculously, both mother and infant survived and, even more miraculously, the birth was spontaneous. As a result, he became their first wonder child.

His early years were spent in Surulere, where his parents lived before his father was named General Overseer of the Redeemed Christian Church of God, and they moved to Mushin and Ebute Metta (RCCG). He had many admirers when he was a boy since he was a natural leader and a true friend. Emmanuel Adewale, one of the grandsons of the mission’s founder, Pa Josiah Akindayomi, was his closest friend at the time and before his death.

Since they were in the world of education themselves, the Adeboyes understood the value of it. They made certain that all of their children received excellent schooling, and Damilare was no different. He began his schooling at Christ the Redeemer Nursery and Primary School before attending The Staff School at the University of Lagos, Akoka. He began his secondary education at Command Secondary School in Ibadan after finishing his primary school education. It was here that he developed his strong work ethic and military discipline. These sterling traits, along with his Christian home teaching, resulted in the appearance of his leadership qualities, and he was appointed as Purple House’s “Head of House.”

Dare later moved to the United Kingdom to further his education in high school, where his leadership abilities were further strengthened when he was named Head Boy of Mayfield College, the first person of colour to hold that title. Damilare went on to complete a bachelor’s degree in Business Information Technology at the University of Central England (now Birmingham City University) and a master’s degree in Theology at the Redeemed Christian Bible College.

Dare was a hard worker since he was a child. While still in school, he turned his passion for high-performance cars into a company.

Dare met Jesus Christ at a young age and dedicated his life to the Kingdom. At the age of 23, he became a parish priest in the RCCG in the United Kingdom, pastoring at RCCG House of Praise in Birmingham. He quickly rose through the ranks to become a Zonal Pastor before relocating to Nigeria, thanks to the enormous development his parish experienced, as well as his dedication, submission to authority, and excellence.

He was posted to Kaduna State upon his arrival in Nigeria in 2009, and then to Zaria with his young family before returning to Kaduna (the State Capital), where he pastored Next Level Parish, which is now the provincial headquarters for Youth Province 6. Despite the abrupt shift in his surroundings, he quickly devoted himself to the Kingdom’s work, and it prospered in his hands much as any other job he had been given. His progress resulted in many more kingdom assignments and obligations, especially in RCCG’s youth ministry.

He was then elevated to the current position of Youth Evangelist in the mission, along with six others. Theylater grew up to be twelve years old and served as the Coordinator of the Youth Evangelists, demonstrating his leadership abilities. He was appointed Youth Evangelist, North Central, responsible for all RCCG youths, RCFs, and RCCFs in the states of Niger, Benue, Kwara, Kogi, Plateau, Nassarawa, and the Federal Capital Territory of Abuja, among other things.

– Chairman Organizing Committee, Northern Zone, Abuja – Pioneer Youth Evangelist in RCCG – Youth Evangelist, North Central – Coordinator, Youth Evangelists – National Director of Programmes, NYAYA – International Director of Programmes, Church Planting and Evangelism, YAYA, RCCG SHIFT – Chairman of the Organizing Committee for the Marathon Messiah’s Praise – Chairman of the Organizing Committee for the RCCG Annual Youth Convention
As he travelled to over 50 countries preaching the gospel without apology or reservation, particularly to the children, young adults, and teens, these positions allowed him to comprehend the landscape and importance of young people around the world, as well as how to improve the Church’s influence in the world.
The youth affectionately referred to him as ‘PD’ and ‘Pastor Dee,’ and he was clearly in touch with the next generation of believers.

Later on, the RCCG established a new system known as Youth Provinces, of which six were established. Pastor Dee was assigned to lead Youth Province 5, which was then part of Region 14, which had parishes scattered throughout Nigeria’s South South and South East states, including Akwa Ibom, Cross Rivers, Rivers, Bayelsa, Edo, Delta, Enugu, Ebonyi, Anambra, Imo, and Abia.

As Pastor in Charge of Youth Province 5, he organised a number of revival and evangelistic events that aided the province’s development and extension, including the Annual Provincial Convention in April and the Dominion Conference in June, among others. RCCG and non-RCCG Word and Worship pastors were included in these programmes.

Further mission consolidation resulted in the formation of a new Youth Region, Region 35, with headquarters in Port Harcourt, Rivers State, and containing all 11 Youth Provinces. It’s worth noting that a new province (Youth Province 10) was born from Youth Province 5 under Pastor Dee’s leadership. The Intercontinental Youth Pastor will lead the area, with three Assistant Regional Pastors assisting him, one of whom was Pastor Dare Adeboye.

He was a forerunner, a trailblazer, a bridge builder, a peacemaker, a leader par excellence, and arguably one of the most inspirational and powerful pastors the RCCG has ever made. Excellence, sacrifice, transparency, maturity, responsibility, discipline, discipleship, modesty, devotion, true affection, fellowship, and marital fidelity were all present in him.

Pastor Dare Adeboye, a seed himself, served as the Pastors’ Seed Family’s International Ambassador (PSF). He served as an adviser, counsellor, and big brother to PSF in several countries, helping to establish, promote, and inspire the organisation.

As he entered the RCCG Chaplaincy Corps and rose to the rank of Brigadier General, his military experience never left him.

He met his heartthrob and priceless gem, Temiloluwa, who was one of his parishioners at the time, while in the United Kingdom, and the lovebirds married in Nigeria on December 28, 2008. She was his sister, boyfriend, cheerleader, and family and ministry associate. Oluwatishe, Ireoluwa, and Araoluwa are their three beautiful children.

PD was a good son, a faithful wife, a loving husband, a caring parent, and a good shepherd.

He dedicated his life to teaching and encouraging young people on how to capitalise on and maximise their trust in whatever situation they find themselves in.

Pastor Dee, 42, went to be with the Lord on the 4th of May 2021, after attending an epic regional conference themed “The Sceptre of Favour.” His time on earth was short, but he led a faithful and fruitful life. Pastor and Pastor (Mrs) Adeboye; Adeolu and Temitope; Adebolugbe and Akin; Oluwagbemileke and Titilope; Temiloluwa; children Oluwatishe, Ireoluwa, and Araoluwa; and various loved ones survive him.

How Pastor Adeboye is Related to Mike Bamiloye

Pastor Dare was a life mentor, motivator, and generational bridge builder. One of the most prominent youth pastors in the Redeemed Christian Church of God Worldwide, he was identified as such.
Dare provided platforms for young people to feel inspired and prepare to wear the church’s crown, as well as the church’s vision and priorities.

Pastor Dare Adeboye was married to Mrs Temiloluwa Adeboye, and they had a lovely daughter together.

Dare died on the 5th of May 2021 while sleeping. He died in Eket, a town he was pastoring located in Akwa Ibom state. He died peacefully and after his wife noticed how long he had slept, she tried to wake him up all to no avail as he was gone to be with the lord.

Pastor Dare Adeboye, the son of Pastor Enoch Adeboye, the general overseer of the Redeemed Christian Church of God (RCCG), will soon been laid to rest.

A special service will be held on Sunday, May 9 at the City of David Youth Church in Eket, Akwa Ibom, where late Pastor Dare pastored, according to a statement signed by Leke Adeboye, the general overseer’s personal assistant and Dare’s younger brother. The RCCG House of Favour, Redemption Camp, Lagos-Ibadan expressway, will host a thanksgiving songs and tribute nite on Monday, May 10 from 4 to 6 p.m., according to the announcement.

On Tuesday, May 11, a farewell service will be held at the Youth Centre, RCCG Redemption Camp.