Top 10 Best States In Nigeria To Hustle In - Factboyz.com 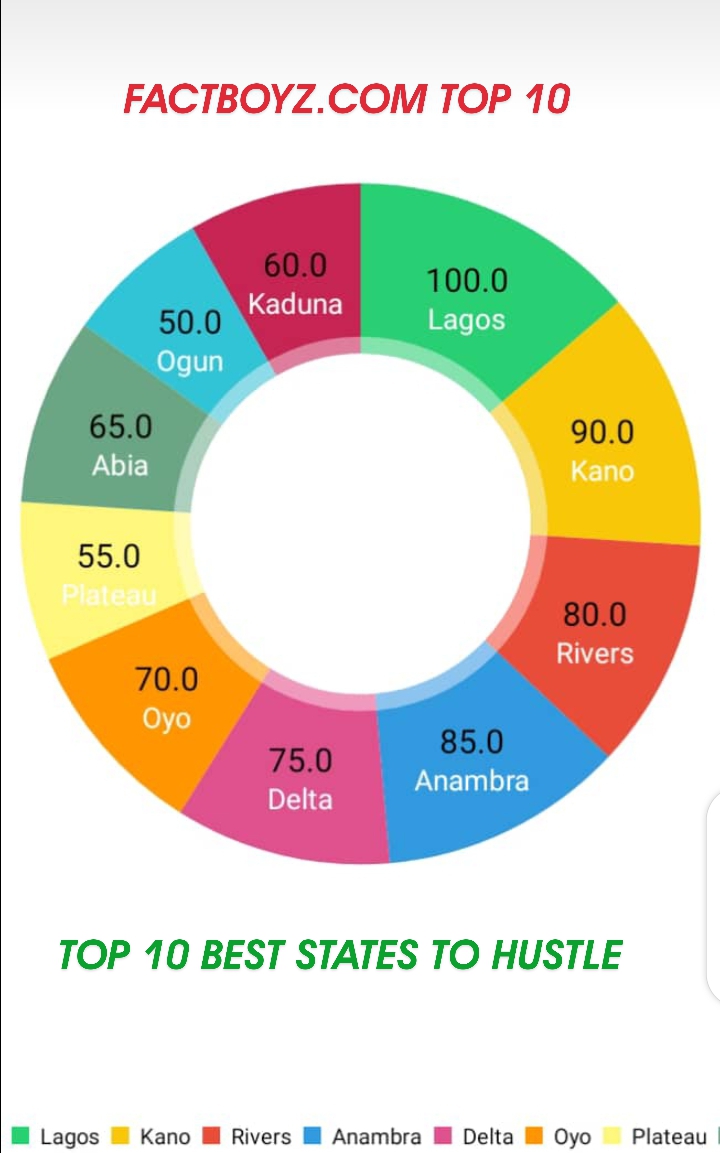 The average Nigerian youth is conscious about hustling to make it big in the country.

With poverty rate in Nigeria increasing; ideas and innovation are abounding as people seek to solve daily problems and challenges in exchange for cash.

The business market in Nigeria is actually attractive; however inconsistent power supply has been the major challenge; with most companies running with standby generators which use expensive fuel.

However, with many Nigerians wanting to start a business with aim of making massive profits; below, is a list of best Nigerian states to hustle and make it big.

The former capital of Nigeria is no doubt coming as the number 1; this is because it is the economic nerve and epicenter of Nigeria.

The opportunities in Lagos are diverse with their tentacles spread across entertainment, information and communication technology, trade, commerce, the academia, and even the religious.

Lagos is the place where you can come in as a poor, unemployed man and still be able to make millions after some years; if you really work hard in Lagos, the chances to make it big are high.

However, for one to really hustle in Lagos, one has to be very smart and proactive with the reserved ability to solve problems and get paid for services rendered.

Lagos is not a place for a quiet, reserved hustler. You must show you have the vibe and the spirit to work really hard.

The northern city of Kano prides itself as the economic hub of northern Nigeria. Every northern city links up to Kano with regards to trade and commerce.

With impressive infrastructure and roads, the city is filled with business opportunities to be tapped into.

The population of Kano alone creates an impressive labour market and target market for startups and growing brands or businesses.

Anambra is undoubtedly the most visited city in the south eastern part of the country with regards to trade and commerce.

The distinct difference Anambra has with almost all the states mentioned here is that up to 65-70% of goods imported into Nigeria end up in Anambra state.

The cities of Nnewi and Onitsha are the major cities where trade is carried out.

If you visit Anambra there is this tense atmosphere you will experience that speaks a lot about the hustling nature of most Anambra residents.

Rivers is a state that can be likened to Lagos in a various number of ways; firstly it is the economic epicenter of far south part of the country.

Secondly, it is the most populous state in the South Eastern and South Southern part of the country. Finally, the job opportunities are as numerous as it is in Lagos.

The population and location of Rivers state gives it an edge over all other Southern state with the exception of Lagos.

Rivers with Port Harcourt as the capital is a developed state; at least going by Nigerian standards with many companies of international origin and indigenous origins sited there.

You must have a resilient, stubborn spirit with regards to approach to business to thrive there.

Delta state is a state blessed with crude oil and it doesn’t come as a surprise in this list; Delta state is home to cities such as Warri and Asaba.

Asaba is the capital of the city with a very close proximity range to the River Niger bridge which links Onitsha Anambra state and Asaba Delta state.

This linkup alone creates a very attractive business atmosphere as goods that make their way to Onitsha end up in Asaba.

Warri itself a different city in the state is home to various oil companies and large firms.

Historically, Oyo state has been a major point for trading point in the South Western part of Nigeria. That characteristic character has remained intact over the years.

The capital, Ibadan is loaded with several business opportunities and the target market for business is highly attractive.

Abia state is home to the commercial city Aba.

With regards to business in South Eastern part of Nigeria, Aba and Onitsha are the two major cities with the best business opportunities with a very attractive target market.

Kaduna state is a state with diverse opportunities especially with focus on the commercial city of Zaria.

Zaria city has been a major city even dating back to the 16th century.

Zaria city services a good number of states in the Northern part of Nigeria.

Plateau state with capital as Jos; is second to none when it comes to business opportunity in the North Central part of Nigeria.

Food in the city of Jos is relatively cheap; hence Igbo traders from Onitsha do make it a point of duty to import foodstuff from this city.

Ogun state is home to most industries in Nigeria.

Ogun state is very close to Lagos the commercial city of the country; hence its inclusion is timely.

Industries that deal on beverages, soap making and plastics are located in Ogun state.

This doesn’t remove the fact that it’s a good state to work hard and make it.

Popular Evangelist Reinhard Bonnke is Dead- His Legacy Lives On