Vision 2020: The Colossus of a Monumental Failure - Factboyz.com 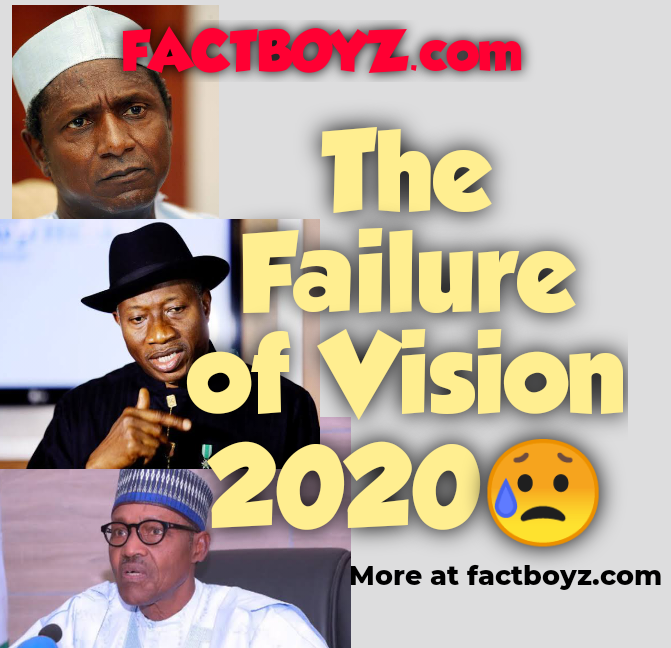 2009 is a year Nigerians will not forget in a hurry, this year marked the beginning of hope for the average Nigerian as the president at the time His Excellency Umaru Musa Yar’Adua mapped out plans for an economic blueprint for the country with the set target for 2020; a cumulative of 11 years from the start date. Yar’Adua’s planned that after a number of validation exercises, he would launch the nation’s economic blueprint on October 1, 2009 to enable Nigeria attain its long term developmental goal of being among the top 20 most industrialized economies in the world by 2020. The blueprint was drafted and announced to the joy of Nigerians, but with the advent of the new year 2020, the plan is far from being materialized. The sad reality stares at the face of millions of Nigerians with many of the opinion that 2009 was a better economic year than 2019, with the exception of 2020 – the new year. This sad reality is the undeniable fact. In 2009, the dollar exchange rate to naira stood at 145-171 naira to one dollar. Currently as at 1st January 2020, that figure is 362.50 naira to a dollar, a clear contrast of the expected outcome of the Vision 2020 plans drafted in 2009.

Umaru Musa Yar’Adua had good plans for the country, but his dreams for the country lacked the effrontery to withstand successive governments who did not build and develop his economic blueprint for the country. His sudden death also contributed to the unfortunate series of events that followed.

ALSO READ  The Eight Reasons The Fitness Industry is Booming

Yar’Adua’s plan can be summarized in 3 Developmental stages

None of the above stages were ever initiated or concluded…

Well, Nigeria is not a stranger to promises that are geared towards the general development of the country. Even in the 1970s and 1980s, some of the politicians who we hold in high regard as Fathers of Nigerian politics and Nationalism all promised to provide constant power supply but that has never been fulfilled already becoming a constant anthem for politicians seeking political office especially in the presidential level. Nigeria is in dire need of infrastructure, it is hungry for an organized system; but how can that come? The vision 2020 we so much hoped for and anticipated for is over with Nigeria not even achieving up to 5% of its laid out plans to become a top economic hub by 2020.

The transportation system in Nigeria is fantastically decayed with every hope of redemption far from sight; the little relief Nigerians get in the usage of quality transportation is dominated by private transportation companies who even complain of the state of roads in the country with bad roads littered everywhere. We cannot deny that the current administration of President Buhari is working hard to ensure that the Nigerian Railway system is up and running with the launching of new trains, wagons, coaches and stations; but the worry lies in the subtle fact that most of these trains do not meet current world standards; but it should be applauded that there is a major revival in the railway system. Airports in Nigeria do not meet world standards, though a promise is around the corner with the spotlight on the Enugu Airport which the Federal Government has assured will meet world standards.

I will not delve into the other sectors that need to revive for economic growth because one thing for sure is this; Vision 2020 was a TOTAL FAILURE.

MNET COMEDIAN, His Bio, Comedy Career and Everything You Should Know About Him

Start Your 2021 Savings Journey With PiggyVest. Get FREE 1000 Naira!