How To Cast Oculus Quest To Your TV With Phone and Headset - Factboyz.com 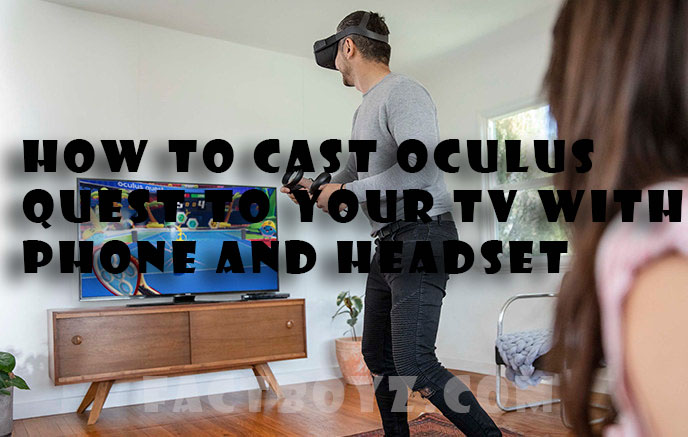 Great news reveals that you can now share your Oculus Quest to your Television (TV) only if you have it’s inbuilt capacity and needed hardware. You can also attach a Chromecast device to share your view in VR.

What your Oculus Quest headset does is that it makes you cast what you see on television for a surreal experience of realism. The casting is basically without a long process and you can use a built-in Chromecast app or a Chromecast device that would be plugged into your television (TV)

All these is made possible because of Google’s Cast Technology which is already built-in into your Oculus Quest. Google’s Chromecasts are simple and unique devices which can be plugged to any TV or monitor using a HDMI port that can cast image from phone or device to the much bigger screen. It allows you to “cast” video and music services like YouTube, Netflix, Spotify and now Oculus to your TV. They don’t use a remote control, as your phone acts as the controller.

1. Make sure that your phone is on the same Wi-Fi network as your Oculus Quest headset.

2. Turn on the Oculus Quest headset and the TV.

3. Start the Oculus app on your phone.

4. Proceed to tap the Cast icon at the top right of the screen – it’s the one shaped like a headset with Wi-Fi waves.

5. If you’re a first time user, grant permissions to the local Wi-fi network.

6. The app should have selected your headset in the top “Cast From” section. If there’s more than one headset listed, be sure you select your headset.

7. In the “Cast To” section, tap your TV or Chromecast device. If it doesn’t appear, make sure your TV is on, the Chromecast is enabled, and then tap “Tap to search for other devices.”

8. At the bottom of the screen, tap “Start.” The Quest’s display will be cast to the TV.

How to Cast Oculus Quest to a TV using your headset

Now to cast Oculus Quest to your Tv, using your headset;

Firstly you must turn on the Oculus Quest headset while putting it on. Use your controller to click “Cast to” in the Utilities pane on the right side of the screen.

Secondly, when the pop up comes out,  scroll and choose your own Tv then use the controller to choose “Next.”

Finally, a notification appears saying your casting has started.