The Unbelievable Story of The Nigerian Man Who Survived Under The Ocean For Three Days After Boat Tragedy - Factboyz.com 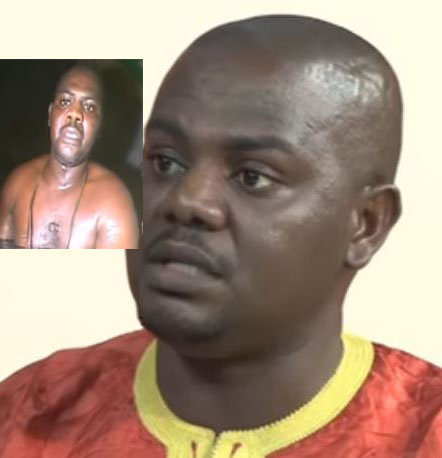 You might be worried and intrigued by the headline you just read above; you might even ask yourself, did this really happen? Or has factboyz.com come up with a made up, false story? Of course not, here at factboyz.com, we serve you facts irrespective of how bored you are. We are poised to lighten your day and serve you interesting articles and news all for your personal consumption. Check out this amazing story of the Nigerian man who survived underwater for three good days without food and possibly water!

On May 26th 2013, about 20 miles (32 km) off of Escravos, Nigeria; a tugboat Jascon-4 was caught by a large rogue wave and capsized. Due to the prevalent piracy activities prevalent in that area, security protocol for seamen entailed that the 12 man crew would lock themselves in their rooms when sleeping. This security protocol rule however slowed down the crewmen in the Jascon-4 tugboat as they tried to escape the tragedy that had already befallen them.

Harrison Okene pictured when he was rescued

The crew members had to first scramble out of their cabins, that is except for the vessel’s cook Harrison, who had gotten up to use the bathroom in his underwear. Harrison Okene a 29 year old man at the time, woke up after hearing some loud noise, ignoring the noise he proceeded to read his bible and after saying a short prayer, he proceeded to use the bathroom. Leaving his bunk, he walked towards the ship’s bathroom to do his business. Harrison would turn out to be the lone survivor of a boat sinking at sea. While in the bathroom doing his stuff, someone screamed in a loud voice, “This vessel is sinking!! This vessel is sinking!!! Initially, when interviewed; Harrison thought it was a joke, but suddenly the lights go off and Harrison quickly realizes that this is no joke. As the chaos ensued, the vessel capsized. Darkness soon enveloped the vessel and there was massive hysteria and acute, unquenchable chaos. Harrison already agitated by the rush of adrenaline, quickly forced the bathroom door open; his eyes searched around as he saw shattered glass scattered all over the place. Some WCs were already broken and everywhere was in proper disarray.  While walking down to find a way of escape, these shattered glass did what they were supposed to do as they shattered Harrison’s legs and tore them causing him pain and discomfort but that was the last thing he needed to be worried about.

The tugboat capsized without proper warning and ocean water rushed in without resistance, The pressure of the water was extremely strong and Harrison was unable to follow some of his colleagues to the emergency hatch. He watched in absolute horror as a surge quickly overwhelmed 3 crew members and swept them out of the boat into the raging sea. Harrison pulled back after seeing this and was pushed from one edge of the wall to another by the water sliding down a narrow hallway. According to Harrison, the surge of water pushed him into the bathroom and amazingly the door slammed behind him and got locked! Confused at how that happened, Harrison stood still as the boat sank ( 30 metres) down to the rock bottom of the sea. Part of his body was underwater in the freezing cold of the water. 100 feet (30m) The surface temperature of the east Atlantic on average is a pleasant 81.9°F (27.7°C). down. Harrison’s mind raced through a lot of things as he shouted Jesus! Jesus!! His mind flashed back to memorable times he had with his family and he prayed to God to save him acknowledging his desire not to see his wife a widow. Harrison was still able to hear the cries of his fellow colleagues who were praying for help. Harrison left the air bubble he was in and got out; he gradually moved and entered a cabin where he spotted a life jacket and grabbed it. He tried to swim out but the cold was just too much for him to continue and he swam back.  Shivering, wet and wearing only boxer shorts, Harrison faced hypothermia, or his body losing heat faster than he could produce it. Cautiously Harrison felt his way around the cabin. He found some tools and used them to strip off wall paneling. With a mattress and the material from the wall, he was able to make a platform to sit on. This platform helped Harrison to stay afloat and lifted the upper half of his body out of the water, allowing him to reduce heat loss.

Hungry, thirsty, cold and stuck in complete darkness, Harrison was terrified. He tried to think about his family. Quite religious, whenever he felt especially scared, Harrison would pray and call on Jesus to rescue him.

Meanwhile, a dive support vessel, the Lewek Toucan arrived to the area of the sinking.

The parent company of the Jascon-4, West African Ventures, had hired a deep sea salvage saturation diving team from subsea services company DCN Global to retrieve the bodies of the lost crew members.

The 6 divers, deck crew and technical staff of the Lewek Toucan were already aware of this very tough mission. Dive team two consisted of Nico Van Heerden, Andre Erasmus and Darryl Oosthuizen with supervisor Colby Werrett topside on the ship, helping to guide the divers via a connected microphone while watching the dive through a camera worn by Nico. The team spent over an hour breaking through an external watertight door and then a second metal door to get into the sunken boat.

Slowly, the divers explored the boat and quickly recovered four corpses when Nico crawled up the stairs to the main deck; it was a tight squeeze with the diving gear on his back. He was in a small passageway getting his bearings and patiently searching when something suddenly touched him…

Harrison had nearly given up hope when he heard a noise and the light afar off from Nico’s torch which kept getting bigger and brighter, he knew help has come.

The video of this amazing rescue will be put up here, for you to see for yourself the mind-blowing moment Harrison was rescued. Nico turned around to see what touched him and when he saw it was Harrison, he freaked out thinking he had seen a ghost. He grabbed his hand and Harrison squeezed it and Nico’s heart raced faster as he wondered how Harrison had survived three whole days under the sea.  Colby, quickly shouts through the microphone “He’s alive, he’s alive!” Colby then tells Nico to comfort Harrison which he did, by patting him on the shoulder and giving him a thumbs up sign.

The divers were amazed to find Harrison alive. The maximum depth for recreational diving is 130 feet (40 meters). Generally, recreational divers don’t stay at 100 feet (30 meters) for more than 20 minutes. In terms of the air pocket, the divers had reached Harrison just in time. A human inhales roughly 350 cubic feet (10 cubic meters) of air every 24 hours. However, because the boat was under pressure on the ocean floor, scientists estimate that Harrison’s air pocket had been compressed by a factor of about four. If the pressurized air pocket were about 216 cubic feet (6 cubic meters), it would contain enough oxygen to keep Harrison alive for about two-and-a-half days. When Harrison was located, he had been underwater for about 60 hours.

The divers thought quickly on what to do and came up with a solution. They first used hot water to warm Harrison up, already assuming he must have been freezing up. He was then fitted him with an oxygen mask. Meanwhile, on the surface, the dive support crew was already in contact with medical and diving experts, discussing how to best help the lone survivor.

He finally arrived above the water around at 7pm on Tuesday, the 28th of May. Disoriented and dazed, Harrison thought that it was Sunday evening and he had only been trapped for 12 hours. He was shocked to learn that he had been underwater for over 2 days. From the diving bell, Harrison was moved to a decompression chamber where he stayed for another 2 and ½ days while his body gradually decompressed to surface pressure.

Of the 12 crew members onboard the tugboat Jascon-4, divers rescued 1 survivor (Harrison)and recovered 10 bodies. The search for the 11 crew member had to be called off due to dangerous conditions.

Harrison made a full recovery and returned to his hometown of Warri, Nigeria; vowing never to return to the sea again. Harrison has appeared on numerous interviews and attributed his survival story to Jesus, who he believed saved him and gave him a second chance.

What do you think of this story? Do you think you would be able to survive underwater for three days? Let us know in the comments and click the red notification icon on your mobile phone or device to get the latest articles from Factboyz

This is Exactly What Happens When You Die